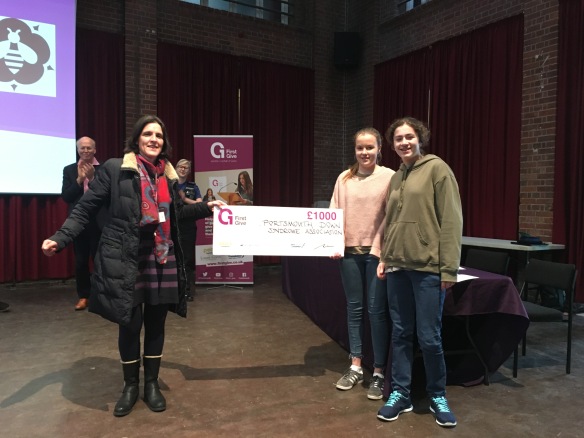 Just before half term, five Block 4 groups gave presentations for the First Give charity final with the aim of winning £1,000 for their charity of choice.

The team representing Catalyst went first and showed us a unique video with interviews with people speaking on behalf of those helped by the charity. Next was the team representing Stone Pillow who managed to raise money with a charity bake sale. They made two very inventive videos, one showing facts on homelessness while the other was a motion picture showing that it could be you on the streets. After that, it was our charity, Portsmouth Down Syndrome Association; we showed a video about a child with Down Syndrome finding the charity online and his life improving greatly. We then spoke about how much we had raised and how much this charity has helped families and children with Down Syndrome. After us, it was Jigsaw Trust, who told us about how much the charity does, how it is improving the lives of those with autism and how it is unique by using old planes to help children get over their fear of flying. Finally, the Salvation Army team told us statistics about homelessness and showed a short interview with a person saying how the charity helped him and others. They also told us how they were going to fundraise by one member of the team running two peaks in the Lake District.

The judges then went off to make a decision: they announced Portsmouth Down Syndrome Association the winner!  The £1000 prize money can be spent funding 13 pre-school sessions (1 years’ worth) to help children develop their learning milestones and help families with the children. The charity’s representative who had come to watch was over the moon to receive the money for her charity. 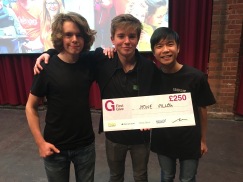 Recently, Block 4 was tasked with selecting various charities for the First Give programme. First Give works in partnership with secondary schools and awards £1000 to each group that has the best presentation (left: 2017 finalists). Our groups are giving their presentations on Friday 9 February, just before Block 4 parents’ meetings. A large segment of the presentation is on how much money the group raises and how much awareness the group can raise for their chosen charity.

The group that I represent chose a charity called Jigsaw. Jigsaw is an independent day school based in Cranleigh for children on the autistic spectrum, and after visiting the school, it is apparent how much £1000 pounds could change the children’s lives. A large majority of the children cannot speak, so some of the award money, or any donated money, can go to speech and language therapy or for the more severely autistic children. They can buy more IPads that they can use to communicate, instead of using an outdated medium called a PEC board – which is very hard to understand. The money can help give the children experiences that they wouldn’t normally be able to have with their families and such a small amount of money can help with such a large amount of other things.

The school itself values individuality and quirkiness and doesn’t try to mould the children into something that they aren’t. Their highly professional care team is outstanding considering the small size of the school. They strive to make the children’s environment safe and caring, yet enjoyable. The school have an online donation page so please do donate to this great cause: https://www.justgiving.com/jigsaw 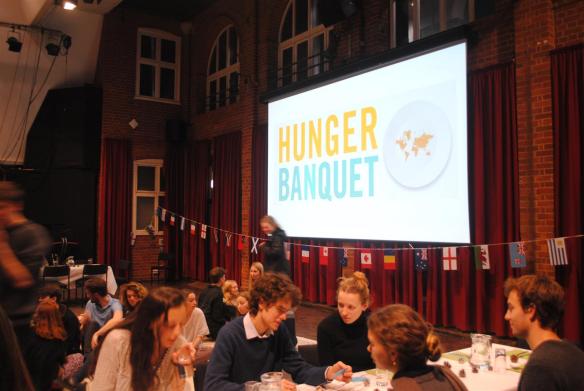 Being globally aware does not have a quiet period so we are starting the new term preparing for the wealth of upcoming events in the Global Awareness (GA) calendar. The eagerly anticipated V Ball, run by GA sixth formers for sixth formers, will take place on 7 February. This event is an annual fundraiser for Amnesty International; it is an exciting collaboration as we work with Amnesty to develop a range of educational materials for use in schools and colleges across the UK and beyond.

On 2 March we are delighted to be welcoming Gareth Owen OBE, the humanitarian director of Save the Children to address Jaw in Dunhurst and a Civics lecture at Bedales. Gareth’s wealth of knowledge and experience will undoubtedly give students across the three schools much food for thought.

We continue the theme of student-led initiatives on 13 March with the annual Hunger Banquet. This event gives students the opportunity to understand the inequalities that exist across the globe and the frustration that this can create. A dedicated team of students from Blocks 3, 4 and 5 are running this event.

Finally, we are incredibly excited to announce that this term, Global Awareness will run as an activity in both Dunannie and Dunhurst. This will be facilitated by myself and run by Block 5 BAC GA students as part of their BAC assessment. This will give younger students the opportunity to develop their own global awareness and allow the older students to plan and deliver the activity, developing their knowledge in a different way. Please watch this space for collaborative events being planned by the groups.

Block 4 students attended WE day at the Wembley arena on 22 March as part of the First Give charity follow-up and to learn more about putting the WE ethos into practice.

WE is a youth empowerment movement that brings people together for service, learning and active citizenship. The key message is to help shift the notion of “me” to “we.” The charitable arm, WE Charity, is an international development charity that partners with communities to help lift themselves out of poverty using a holistic, sustainable five-pillar development model based on education, clean water and sanitation, health, opportunity and food.

The event in London brought together world-renowned speakers and A-list performers such as Kate Winslet, The Vamps, international human rights advocate, Maria Munir and education activist Muzoon Al-Mellehan and tens of thousands of young people to celebrate a year of action that transformed communities and changed lives. View photos.

By Mary-Liz Houghton, Teacher of English and Classics

On the last day before half term, seven Block 4 teams took part in the final of the First Give Charity competition. The Programme encourages an entire year group of students to identify social issues in their area and engage with local charities that address them. The students then have the opportunity to compete for £1,500 of grant money spread between three charities. Teams do this by advocating for their charity in a competition-style ‘pitch’.

The scheme of work promotes many aspects of Social, Moral, Spiritual and Cultural education within secondary schools. The finalists, along with their whole year group, had spent time since September choosing a local charity to support, visiting them and then producing a group presentation including PowerPoint slides and, in many cases, their own film. There were heats to decide which teams’ presentations were the most powerful and then these were entered into the final.  The winning team, who were supporting Guildford-based charity, Disability Challengers, gave a very effective, moving and well researched presentation and thus won their charity £1000.

The two runner-up teams, supporting Stone Pillow (a charity supporting the homeless in Chichester) and The King’s Arms (which supports young people in Petersfield) each won £250 for their charities. All the teams, regardless of winning even the heat, have raised money this year for their chosen charity.

Usama talked about the goals and successes of the Foundation as well as his own personal history. Having grown up as Muslim in England, Usama explained how many people had treated him unfairly purely based on his devotion to his religion. Despite this, Usama graduated from top universities (London and Cambridge) and became a leading scientist gaining an MSc, MA and PhD in Theoretical Physics and Artificial Intelligence.

Usama talked openly about his past as one of the leaders of the Salafi Islamic movement; he and many of his men fought in Afghanistan and Bosnia during the 1990s. Returning to the UK, Usama published a series of essays and academic papers that address Islam, law, equality, scientific ethics and human rights as well as joining with the Quilliam Foundation to challenge extremism.

After the talk, a group of students joined Usama for dinner where discussion focussed on tackling Islamophobia through media, gender equality within religion and the rising tension between the Israelis and Palestinians. Overall, Usama broadened our knowledge on a variety of topics whilst managing to explain the different perspectives between extremist and pacifist Muslims. 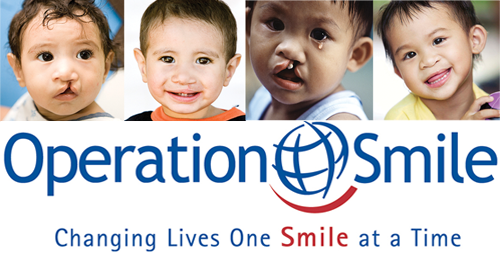 I work for Operation Smile, an international children’s medical charity and I helped arrange for volunteer Phil McDonald to speak at last week’s Jaw. Phil, who is an anaesthetist and also the charity’s Medical Director, has been volunteering his time and expertise for over 20 years. Phil has travelled all over the world and helped treat thousands of children most of whom are now free of seriously debilitating facial deformities.

170,000 children are born with a cleft lip or palate each year; 70% go untreated. To bridge this gap, Operation Smile send volunteers on missions throughout the year to treat as many patients as possible over a five day period and train local healthcare professionals to continue their work.

Children living with clefts often suffer from infections, malnutrition, breathing difficulties and bullying. Luckily the condition is easily treatable through basic surgery and can take as little as 45 minutes to correct.

The talk ended with a short video showing a mission in Ghana – the reaction of the children and their families really drove home just how important the work Operation Smile is.