By Noelia Carbajal, Groton School, Massachusetts
Bedales, or England for that matter, is unlike anything I had anticipated. Perhaps because my initial suppositions were based solely on the six season Netflix series, Downton Abbey, which takes place before World War One. Though there is no one quite like Lady Mary and her sisters, Bedales and its residents were a lovely surprise. The campus is absolutely stunning. I’ve enjoyed all of my classes, especially Ancient Civilizations with Chris who took us to Butser Farm and Stonehenge. I look forward to continuing Latin throughout my school years and even taking an archaeology class someday! I’ve made so many great friends here at Bedales and I hope to stay in contact with them. Thank you! 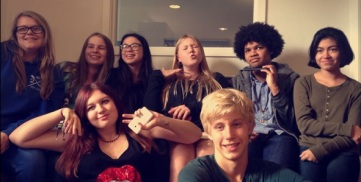 MALIK AND NOELIA (right) with their new bedales friends

By Malik Gaye, Groton School, Massachusetts
Now that my month at Bedales is coming to a close, I think my time here has been bittersweet. At first, I felt like I was sent  into a school where I knew virtually no one and especially didn’t know how to maneuver my way around the campus. The latter usually ended up with me having to retrace my steps and ask where a certain place was. But as I got used to my schedule, the people, and the general culture, I found that I was enjoying my time here. I was making friends and finally could make my way around campus on my own. As soon as I realized this, I also realized that my time here had a deadline. It’s not like I didn’t miss home and my friends because I definitely did. But it was the sense that there was so much more to experience here at Bedales and that I wouldn’t get to experience it that saddened me. I have definitely enjoyed my time here and wouldn’t change anything about it. This month has really flown by and I will miss those I have become close with. I hope that more Grotonians will have the priviledge to come and enjoy all that Bedales has to offer.

For the past month, we have been completely immersed in the Bedalian culture. On our very first day, we were greeted warmly by everyone and began to adjust to the life here. We were given our timetables almost immediately after we arrived, then we went to our lessons and were toured around by students whom we soon became good friends with. Even though we only had about three hours of sleep on the plane the night before and were quite jet-lagged, we were still very excited to be in this new place, meeting new people. We attended Jaw on our first evening, which we soon realized was similar to a tradition we have at Groton, in which a student or faculty member gives a talk before the whole school. It was also interesting to find another commonality between the two schools in the tradition of handshaking. A difference we realized that night was how important the activities are here, and we were pleasantly surprised to find that Quiet Time does not happen six days a week like it does at our school.

As soon as we joined our classes here, we noticed how different the education system is. In America, we don’t take GCSEs or A Levels; most people take about seven or eight classes each year throughout their high school career and never specialize in three or four subjects like sixth formers here do. It stuck out to us as different right away and we couldn’t imagine how we would ever be able to pick only four subjects to learn. This was definitely the biggest difference that we noticed. After observing the system here and comparing it to our own, though, we decided that each one seems to work best for its environment, and it was very interesting for us to be able to experience the one here in comparison to the one we are familiar with.

We were asked many times about the differences between the schools, and it was hard to answer at first because we had mostly noticed small ones, other than the difference between the education systems. Everyone seemed to be expecting us to draw some drastically large contrast between the two, but in reality we just have a list of subtle ones that add up to make each school individual. We board at our school as well, and we noticed that the atmosphere of the community here is quite similar to that of Groton. We were surprised to feel so comfortable at this school right away, but we did because of that similar sense given off by the community. From the moment we arrived, girls came to greet us on flat. Students gave us tours around the campus and showed us how to get to our classes during our first few days. We became good friends with many people over the past month. It was great to be so fully immersed in the culture here, even for such a short amount of time, and our amazing experience is all due to the people here who helped us.